IMF Forecasts China To Overtake The U.S. By 2016

According to the IMF forecasters, in 5 short years China will overtake the U.S. as the single largest economy in the world.  This news is amazing (for those not paying close attention to ascendancy of China) in that the U.S. economy was three times the size of the Chinese economy in absolute terms just a short 10 years ago. 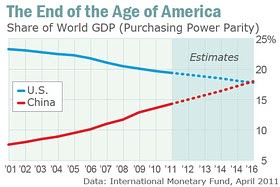 Before you ask "how does this affect me?", let me remind you that we historically owe our overall high standard of living mostly to the fact that the U.S. is (at least for a while longer) the largest and most stable economy in the world.  So, what are the implications of what many thought to be the tortoise passing the hare in the race?  How real is the danger?  And more importantly, what are the lessons to be learned and how can we prevent the catastrophe that likely awaits us?

First, lets relax a little.  Yes, the Chinese economy will eventually overtake ours in absolute GDP terms but in per capita basis, at Purchasing Power Parity, the U.S. is still far ahead - in fact for the Chinese to catch up, their GDP in absolute terms would have to reach $47 trillion - a far cry from its current $7.5 trillion or so.  Also, we must remember that the Chinese miracle has been built on currency manipulation, unfair trade practices, and human right abuses as it relates to worker's rights.

Now that we have relaxed a bit, it is time to examine the more serious side of the issue.

The most obvious implication of the U.S. being dethroned is the cloud over both the U.S. dollar and the huge Treasury market, which have been propped up for decades by their privileged status as the liabilities of the world’s hegemonic power.  This, folks, is at least theoretically a big deal since with $14 trillion current national debt and projected future deficits adding $1 trillion or so per year to that figure, U.S. and the dollar simply cannot lose their footings as global leaders without disastrous consequences.  Already, the S&P has downgraded the U.S. debt to a negative outlook - not a good sign.

Cost of financing our debt, itself, is well on its way to reaching one trillion dollars.  At current interest rates, this is bad enough if we consider that federal income taxes only bring in somewhere around $2 trillion in revenues (or, historically between 16-18% of the GDP).  U.S. debt can be financed at low interest thanks to the status of the dollar and the confidence of the international financiers in the ability of the U.S. to resolve its problems.  The problem is that confidence has been steadily eroding over the past few years.

Now consider what if the already weakening dollar - thanks to disastrous Fed and government policies - was either replaced by another global currency as China and several other countries want, or interest rates hit 10-12% range on long term U.S. Treasuries (a preview offered last week when Greek long term bond yields reached at nearly 15%)?  The result would be unsustainable debt servicing levels, leading inevitably to the U.S. having to default on their obligations.  This is the stark reality we face, as pointed out by the international community as well as the President's debt commission, despite politicians' apparent indifference.

As for how imminent this danger is, most forecasts seem pretty sound, with one caveat.  Many such forecasts assume a constant exchange rate when projecting future GDPs.  The problems with such assumptions lie in the superficial exchange rate for the Yuan, which is the most heavily manipulated (purposefully kept undervalued) major currency in the world, as well as in the presumed strength of the dollar which is looking shakier by the day.  Any variations to these assumptions could easily move the target date up or down, but the end result is likely to be the same absent meaningful action by the U.S. (since we cannot control what China does).

The methodology behind the IMF forecast is different, however - and it is not necessarily a comforting difference from the U.S.'s perspective.  IMF uses the more reliable PPP (Purchasing Power Parity) instead of presumptuously constant exchange rates in their analysis.  It is in these real terms that IMF concludes 2016 as the year the Chinese economy will overtake ours (see above chart).

That brings us to the all important question of 'what are the lessons to be learned and what can we do?'  The U.S. must deal head on with its budgetary deficit problem.  The structural deficits that seven decades of progressive ideals (social security, medicare, medicaid, war on poverty, etc.) have racked up must be confronted as the time to pay the piper has arrived just as it has in european social democracies.  Despite Democrats' demonization of military spending - puzzling since national security has no substitute - it is the entitlement spending that is breaking the camel's back.  Our problems are infinitely greater than the extra $100-$200 billion a year spent on Iraq and Afghanistan.

It is simply pie-in-the-sky thinking for us to think that there are no consequences to deficit spending.  Despite likes of Paul Krugman and other clownish progressive ideologues that like to pass themselves as economists, the international community at large has already made their disapproval of the U.S. budgetary sideshow known.

In a microcosm of the greater picture, imagine a neighbor who habitually overspends his salary and has to constantly borrow money.  Despite having good track record of paying some of his debt, his overall debt load is spiralling out of control, and he has no plan to either get his spending under control or to earn a higher income.  Would you lend him money?  Would a bank do the same?  Well, as the ability to repay becomes murkier thanks to ever increasing debt load, risk of default also increases, therefore any potential lender - including you - would want a higher risk premium with the loan.  This is exactly where we are headed.

What must the U.S. do?  First we must reform the political process in order to end rampant corruption and return politics in to a service to the nation once again.  We must reform the complicated tax code to make taxes fairer.  We must reform entitlements and disembark from the disastrous progressive policies of the current Administration - meaning loosening of the strangling regulations that have stunted innovation and entrepreneurship, which are what America has always thrived on.
Recapturing that state of mind - American exceptionalism - will ensure continued prosperity for all Americans.

The headlights that we see in the tunnel are those of a speeding locomotive headed straight for us.  We must either heed the warnings or get ready to be obliterated.
Posted by The Patriot at 8:39 AM

The Chinese face two big problems that I hope will bite them in the butt SOON! One, they have about 350MILLION people living in poverty. Two, they have sheltered the Yuan against trading on the world market. I hope thier bubble busts soon.

So, two years later, any sign of that bubble bursting??

The Patriot
A European transplant, I have lived in the U.S. since 1977. I recieved my Bachelors in Management from Bentley U., an M.B.A. in International Management/Finance from Thunderbird (formerly American Graduate School of International Management), and completed the course requirements for a M.S. in Real Estate/Institutional Investment from Johns Hopkins U. I currently work in the Real Estate field. Ever a Jeffersonian constitutionalist in my views, I believe it is time to regain our Constitutional Republic once and for all before our beloved Constitution is irreparably damaged and our liberties lost forever.